What is bovine TB?

Bovine tuberculosis (bTB), as the name suggests, is a strain of TB which mainly affects cattle and is caused by Mycobacterium bovis (M. bovis). Unfortunately this strain of the disease also causes TB in badgers, as well as other wildlife and domestic animals, and causes ~0.5% of the human TB cases in the UK.

A brief history of bovine TB and government policy:

Bacillus Calmette-Guérin (BCG) is an attenuated strain on M. Bovis which is widely used around the world as a vaccine against human TB. It protects mainly against severe childhood forms of TB. Recent study and field trials published by Mark A Chambers et al. 2010 demonstrated that intramuscular BCG vaccination of badgers reduced the severity and progression of bTB infections. It concluded “…BCG vaccine… could provide a new and important component of a comprehensive programme of bovine TB control for cattle in UK and Ireland. Several more trials have started up, by DEFRA, the National Trust, the Gloucestershire Wildlife Trust and others.

Cattle slaughtered as a result of bTB testing:

Graph below clearly shows that the rises suffered started with the almost complete lack of cattle TB testing and slaughter during the 2001 foot and mouth outbreak. 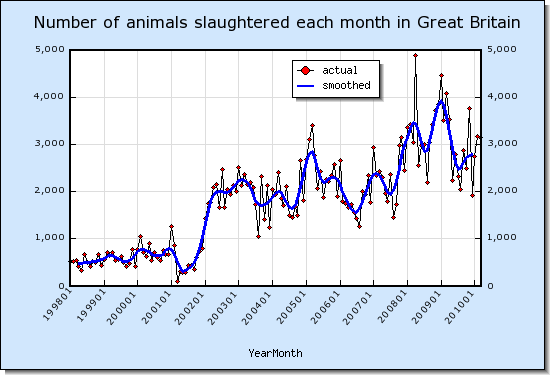