The Badger Trust promotes and enhances “the welfare, conservation and protection of badgers, their setts and their habitats for the public benefit”.

It supports around 60 local groups, of which the Bucks Badger Group is one. We are a full member of the Badger Trust and a percentage of our subs goes to the Trust for the following initiatives: education, awareness, training, media publicity, etc.

Latest News from the Badger Trust 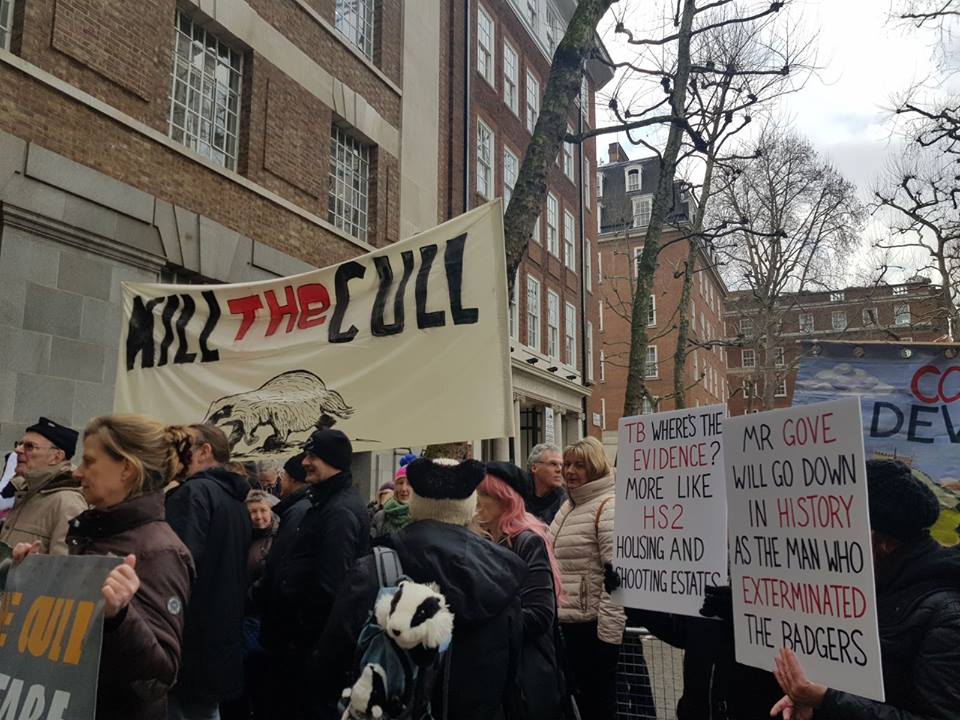 The Board of the Badger Trust has just approved £20,000 funding to assist Tom Langton’s two Judicial Reviews into the government’s expanded badger cull policy. The new grant follows on from the success of Tom’s ICO case for which the Trust raised £12,100 through direct grant and crowd funding efforts.

“The Judicial Review cases have been greatly strengthened following the release of information as a result of the ICO tribunal win,” says Badger Trust Chairman, Peter Martin. “It’s important we capitalise on this success by keeping up the pressure on the government.”

Two Judicial Reviews will be heard together on 9th to 11th July 2018. One relates to procedures surrounding Supplementary Culling in Gloucestershire and Somerset. The other relates to Habitat Regulation Assessment of impacts on vulnerable wildlife within and surrounding cull areas and the related 2017 licences. A third and further challenge to the 2016 badger cull impact assessments is being ‘worked up’, also following on from the successful ICO Tribunal in 2017.

The plan is to budget for the worst case scenario but should the cases be won then any funds left over will be used to help prime future essential legal work, as it will almost certainly be needed. The High Court have limited the claimants ‘costs’ liability to a maximum of £10,000.

However, a further £40,000 or so is still needed to ensure all costs are covered. Many groups and charities have very kindly chipped in but Tom still needs around £10,000 per month until July to reach his target.

If you would like to add Gift Aid to your donation, please use The Badger Trust’s Just Giving page.http://www.justgiving.com/campaigns/charity/badgertrust/nomoresecrets

Peter MartinChairman – on behalf of the Board of Trustees

Badger Trust Chairman Peter Martin and CEO Dominic Dyer met with Environment Secretary Michael Gove on Tuesday 24 October to discuss a range of serious concerns with the current badger culling policy. The meeting follows a number of previous meetings with MP’s and advisers to the Prime Minister, to see if a better way forward can be reached over a TB policy that is clearly failing in England compared to the much more effective strategy employed in Wales.

“The meeting was good natured and constructive,” says Dominic Dyer. “We covered a wide range of topics from the origins of the policy to its basic failure to address the spread of bovine TB. On taking office, Michael Gove publicly announced that he intended to review the science around badger culling and he seemed genuinely engaged and interested in what we had to say.”

“We had a number of specific requests for immediate action,” continues Dominic Dyer. “The first was that we are aware a large number of badgers from last year’s culls were tested for TB but that Defra had so far refused to release figures on how many were infected. We urged him to make this information public for the benefit of all. We also asked that Defra be far more open to contact and discussion with wildlife NGOs and other stakeholders with an interest in badger culling and the wider TB eradication policy. We pointed out that we have excellent access to the Welsh government’s TB team at the highest level and that they seemed far more open and accountable.”

“Whilst we reiterated all the standard concerns about inhumaneness and the danger of rapid extinction of the badgers’ population,” comments Peter Martin, “we also impressed on the Secretary of State that the whole TB eradication policy was both flawed and completely inadequate. Farmers simply cannot wait twenty-five years to resolve this problem and that a fundamental rethink of the policy was needed. We highlighted the complete inadequacy of the cattle testing regime, the lack of proper risk based trading for farmers and bio-security advice that was too little, too late and not enforceable by Defra.”

“We asked the Minister to address the failure of Defra to employ the more effective Gamma Interferon test in the High-Risk Area of the South West and to fast track development of even more effective tests such as Phage PCR,” continues Peter Martin. “We pointed out that there was no hard-scientific evidence of how or to what extent badgers can infect cattle with TB, while the latest studies showed that badgers actively avoid contact with cattle. We pointed out that the government had already spent nearly £40 million pounds of taxpayers’ money on culling badgers with no evidence that it was having any effect or would have in the future.”

“When asked our opinion on the origins of the culls and why they had been started,” continues Peter Martin, “we said the idea was based on a deep seated and misinformed opinion among many farmers and landowners that badgers were to blame for bovine TB and that killing them was the only solution. We pointed out that TB is a complex epidemiological problem and that a crude, indiscriminate cull was a rather grotesque, medieval solution that had somehow survived into the 21st century. The culls are in fact a costly and dangerous distraction from getting on with the real business of eradicating TB.”

“These meetings never last long enough, “concludes Dominic Dyer, “but we left Michael Gove with a lot to think about. We had the distinct impression he really wants to get to grips with the issue and make a difference rather than just stick to a failing policy that is causing more problems than it is solving. We ended by expressing serious concerns about how the culls were being handled on the ground with little or no supervision by the NFU or Police regarding firearms safety, the number of badgers actually being killed and some very worrying reports of violence by cull supporters.”

Badger Trust challenges government’s lack of evidence after 19,000 more badgers culled in 2017 and calls for a full policy review.

The Badger Trust has called on the government to provide conclusive evidence that their cull policy is reducing levels of TB in cattle following the announcement that a further 19,000 badgers were culled in 2017.

“After four years spending over £50 million in taxpayer’s money and the deaths of over 40,000 badgers, the government has never been able to demonstrate any conclusive evidence that the policy is working or that it ever will,” says Dominic Dyer, CEO of the Badger Trust. “The latest statement from Farming Minister George Eustice [1] relies entirely on one piece of research [2] which clearly states that there is ‘no association between culling and TB incidence for Somerset, or for either of the buffer areas for the first 2 years since culling began. A weak association was observed in Gloucestershire’. The paper then goes on to state unequivocally that ‘it would be unwise to use these findings to develop generalisable inferences about the effectiveness of the policy at present.'”

“This piece of research is simply a statistical modelling exercise using carefully chosen assumptions to create an impression that the culls are working whilst directly admitting that the raw data says nothing of the sort,’ continues Dominic Dyer. “The rest of the government’s analysis and reporting [3] relies heavily on caveats and words such as ’should’ and ‘could’ instead of ‘will’ and ‘does’. The truth is that for the last five years the government and pro-cull lobby have presented us with a continuous stream of false justifications, cherry picked data and anecdote masquerading as scientific fact, all in the absence of any conclusive improvement in levels of bovine TB.”

“The vast majority of badgers killed have been free of the disease,” continues Dominic Dyer, “very few were ever tested and for those that were the government refused to release any figures showing how many had TB. The whole process is not just cruel and inhumane, it is completely indiscriminate. It doesn’t take much imagination to realise that culling healthy badgers is never going to help farmers rid their herds of this disease. There has, in any case, never been any conclusive scientific proof of how or to what extent badgers can pass on TB to cattle in the first place.”

“The government and pro-cull lobby’s position has now become completely untenable,” says Badger Trust Chairman, Peter Martin. “It is clear from Westminster insiders that there is a growing tension between the pro-cull people and those that realise the public cannot be fooled by a lack of evidence for much longer. Animal welfare has become a massive public concern that is really threatening the short and long-term survival of the government. People are seeing the culls for what they are, a mass slaughter of a much loved and protected British wildlife species for no apparent gain in TB eradication. The new Environment Minister Michael Gove has promised a full review of the policy and we expect him to be true to his word.”

“In fact, we think the government needs to radically rethink the whole policy from top to bottom,” continues Peter Martin, “as the current twenty-five-year strategy is way too long for farmers to wait for a result and is highly unlikely to succeed in any case. A full independent review of the scientific, animal welfare, ecological impact, costs and public safety aspects of the badger cull policy must now be undertaken as a matter of urgency. This review should not only involve the farming and veterinary industry but the Badger Trust and other leading wildlife protection organisations.”

“The Welsh government have led the way in cattle TB reduction and Westminster now needs to follow suit,” concludes Peter Martin. “They have achieved this through tighter cattle controls, better biosecurity measures and improved TB testing systems, and all without culling badgers. This has to be the starting point for any future policy and it must also include a system of risk-based trading that does not bankrupt farmers if they do get a TB breakdown. But whatever happens we can never go back to the mass slaughter of our wildlife to satisfy political agendas or as a cover for landowners to reduce numbers of an animal they traditionally do not like. The culls must end now.”